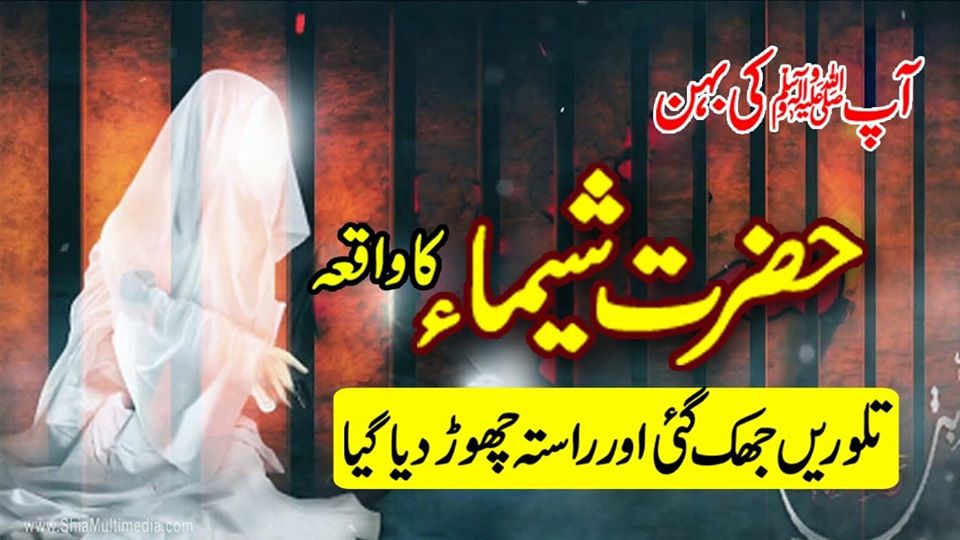 I had no sister in his presence, but when he went to Sayyidah, Sayyidah, there is mention of a foster sister.

The name of the woman who gave you the name was Sida Shima.
In the evening when women were busy cooking, the sisters would pick up their brother and take them out, and every sister thought that there was nothing better than my brother’s time.

They say that the beautiful eyes are in the eye of the beholder, so whose brother’s color is beautiful, she says nothing but color and the sister whose brother has the most beautiful and beautiful appearance, he says what color.

The real beauty is the imprint and the grace of a sister whose brother’s eyes are beautiful, she says, “Look at the lake like my enemy.

In the meantime, Sayeda Shima took his brother, Sayedna Mohammed, and from a distance he said my brother had also come, so everyone would bow down and say no. No one can fight your brother. We are talking to each other.

You are not talking about competition, and then when a sister’s brother unanimously says that your brother is beautiful, then his pride will also be felt and his tastes start to touch the sky.

Ibn Hisham is the first book of the Sirat, in which it is written that the Syeda Shi’mah took the Prophet (peace and blessings of Allaah be upon him) and then bowed, and then he wrote the words of Lori and Lori.

At that time, the time came that the Holy Prophet (peace be upon him) went to Mecca and Syeda Shema was also young, married in a tribe. The Prophet prophesied the proclamation of thirteen years, and he went to Madina Sharif.

When Ghazawat began, Muslims clashed with the tribe in which the tribe of Sayeda Shemma was married. Allah’s Messenger of Allah gave victory to the Muslims, then some people of that tribe were arrested and imprisoned at the hands of the Companions. When given, they started collecting ransom to release their prisoners

And the chiefs of the tribe are collecting money from one house to another.
On the way, they reached the house of Sayeda Shima, who had spent a certain part of his age, saying that so much of you also came.

Said Shima
for what ?
The chiefs and their companions said, “The fighting has happened and our men have been arrested. While talking, the name of Muhammad (peace be upon him) came on the lips of some one.” Sayed Shima said, “Well, they have caught your people.”

Sayeda Shema said, “Stop collecting money and take me with you.”
The chief said: Take you with me?
Sayed Shima said, “You don’t know what my brother looks like.”

With the leaders of the nation, Syeda Shi’mah is going to the tents of the Holy Prophet and the companions are guarding the naked swords, it was Makki, not Madani.

And when the leaders of the Shi’a Shi’ma started to advance, the Companions heard swords and cried.
And the lady of the village does not want to stop and the Messenger of Allah is there.

Leave me alone You do not know I am the sister of your Prophet
Swords bowed, eyes twinkled and left

When Sayeda Shema entered the Holy Prophet’s tent, Noor saw and recognized him. Immediately he got up and said, “How did the sister come?”

He said, “Your people have caught some of our servants. I have come to rescue them.”
The Prophet (peace be upon him) said: “Sister, why did you bother? The messenger left the message but you came and met well.”

Then the Holy Prophet announced the release of the prisoners, giving some horses and a couple of gifts to Sida Shima.

The Holy Prophet (ﷺ) gave a lot and came out of the tent to leave while the congregation of the Companions was waiting.

He said: O companions! You know that every time I release a prisoner, it is my habit to consult you, but today is the time when I did not consult you and release the prisoner.

Whatever you wish, the Companions said, “Why do you not advise the Prophet (peace be upon him), then say:” My sister came to my door.